I posted yesterday about my Super Secret Valentine Present and how my plans for the afternoon were to finish it off.

The present was a little fold up photo album and all I needed to do was to put in some pictures and write a few notes in it.  Off I went in search of our old photos from when we first got together and I spent ages looking for them - but couldn't find them.

So I started to panic a bit knowing that he would be home soon and I had nothing to give him.

Last week I bought a pack of valentines sweets for us to share in the evening called LUV TXTS, think love hearts but a modern, chewy, gummy, and surprisingly tasty version, and so I thought I'd make a quick box to put the sweets in.  I'd seen this tutorial a couple of weeks earlier and saved it in my favourites for future reference and loosly followed the instructions to make the box.

As I had no patterned card or paper suitable I used some black card and heat embossed some clear and red hearts onto the card.  Then as I had only loosely followed the instructions I had to find something to stop the box and lid coming apart as the lid was too big  /box to small. So a rummage through my craft drawers found some paper wire to tie it up.

And the end result: pretty poor, I really should have made more effort with the paper wire, perhaps using a double thickness as it's far to thin with the chunky box but by that time it was 6pm he was due home shortly, two darling children were begging for my attention and wanting to be fed.


Anyway here's the end result of my sorry sob story: 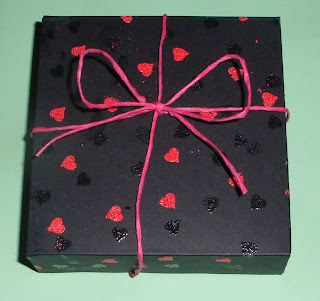 My school report for this says must try harder.  I'd like to say I'll learn my lesson and not leave things to the last minute in future - but I doubt it.
As for the Super Secret Valentines Present, I need to enlist his help to find the photos, I've shown him the empty album and he was very impressed with my handywork - so once it's finished I'll post a photo.

Nothing worse than leaving things to the last minute! Though I think everyone does it from time to time.

Don't beat yourself up about the box, I think is actually looks quite good. After all, it's valentines, not Christmas ;)

Julie I did have to laugh at your post, don't be so hard on yourself it's looks lovely to me
hugs Mandy xx

I design for Kitty Bee Designs 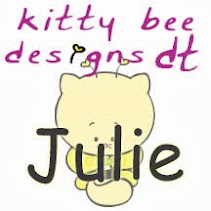 Julie
I took up card making in August 2010. It was supposed to save money - but I can categorically state it's done the exact opposite! I started my little blog in January 201l and the point of my blog was to help me improve my card making. And I have to say that I have learned loads from other people who are more than happy to take the time to comment on your work, answering random questions and spend time posting tutorials for other people. So thanks for that people!